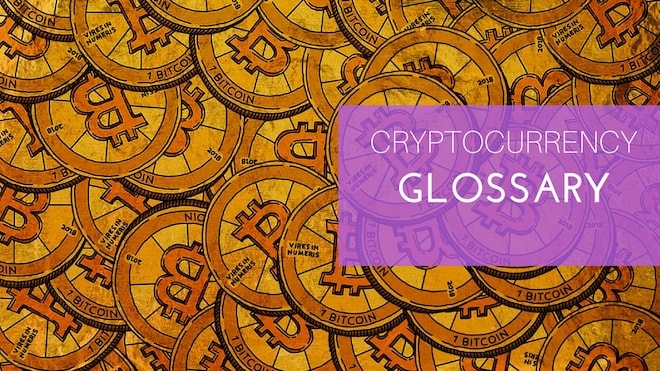 Altcoin: A Cryptocurrency/Cryptoasset other than Bitcoin.

ATH: All time high. A trading term used when the highest price a particular cryptocurrency has witnessed so far.

Address: A protected identifier marked by an exclusive string of character that enables payments to an individual or organization via blockchain transactions. For example, Bitcoin addressed comprised of alphanumeric strings that begin with a 1 or 3.

Bag Holder: A financial term that denotes someone still holding a crypto asset after a pump and dump crash.

Bitcoin (BTC): A first-ever cryptocurrency created by an individual named Satoshi Nakamoto in 2009. It was the first digital currency that enabled instant P2P (peer-to-peer) payments.

Bitcoin Cash (BCH): A cryptocurrency that was created in August 2017 and is more or less a clone of the Bitcoin technology but has increased block size capacity (from 1 MB to 8 MB) as a mean to solve the scaling problem.

Blockchain: An universal decentralized, digital ledger where transactions made in Bitcoin and other altcoins are recorded publicly.

Block height: It represents the number of blocks mined after the genesis block.

Circulating Supply: An approximate number of coins or tokens that are circulating in the public market.

Confirmations: Whenever a bitcoin transaction takes place, the blockchain confirms the transaction validity. The confirmation is executed by miners very 10 minutes when a block is mined.

Cryptocurrency: A term that denotes all sorts of digital currencies that are decentralized.

Cryptoexchange: A website that hosts arrangement of buying and selling of cryptocurrencies.

Decentralized: A state where there is no intermediary or central intervention.

Distributed Consensus: Unanimous arrangement by numerous computer systems in a network and allows it to work in a decentralized environment.

FOMO: Fear of missing out which represents a state of mind in which you want to get onboard a burning price rally.

FUD: Fear, Uncertainity, and Doubt. It is a strategy to influence a thinking by spreading negative, misleading or false information about something.

Halving: It refers to 50% reduction in block reward after a specific number of blocks are mined. For instance; In Bitcoin, the halving happens after every 210,000 blocks.

Hash Rate/Power: The rate at which a given piece of hardware can mine a coin.

Hodl: A misspelled term for ‘hold’ that means “hold on for dear life”. It means to hold onto the cryptocurrency for a long period of time, regardless of market volatility.

ICO: It stands for ‘Initial Coin Offering’ similar to Initial Public Offering. It is an arrangement made by the company to offer coins to the general public in return for a fixed priced investment.

Moon: It refers to a state where the price of a cryptocurrency moving to enormous heights.

Satoshis (Sats): The smallest fraction of a Bitcoin is called a Satoshi. In other terms, it represents one hundred millionths of a bitcoin.

Wallet: A store of digital assets such as cryptocurrencies.

Whales: It refers to an individual or an entity who holds an enormous amount of particular cryptocurrency and has the potential to manipulate the market single-handedly.

Whitepaper: An information document that represents the problem and solution that the cryptocurrency project is planning to solve.